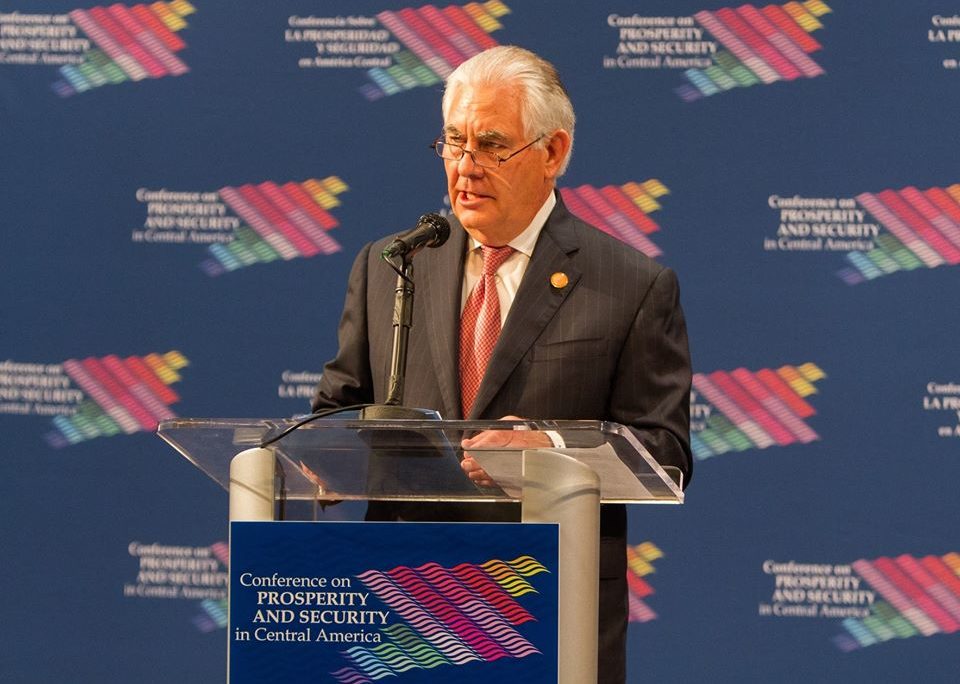 SECRETARY TILLERSON: Well, thank you, Jorge, for that most kind introduction, and also in particular, I want to thank Florida International University for providing their campus and the host site for this conference, which we have been planning for some time and very excited to get it underway. I also want to thank Foreign Secretary Videgaray, Secretary Osorio, the Government of Mexico for cohosting this conference, along with my colleague, Secretary of Homeland Security, Secretary Kelly.

The idea for this event originated in our first bilateral that Secretary Kelly and I took to Mexico City, and our discussions with our counterparts and a recognition of how important Central America was to both of our countries, the United States and Mexico. And it was from that dialogue that this conference that we’re hosting today has emerged.

I also want to recognize President Hernandez, President Morales, and Vice President Ortiz, and thank each of you for your efforts to make this conference a success. Secretary Kelly and I are both very excited to be holding these important discussions on how we can improve security and prosperity in our respective bilateral relations, as well as, as a group.

As part of the President’s agenda, we seek to bolster U.S. national security, secure our borders, and advance U.S. economic interests. Promoting prosperity in Central America is a key component of this effort, as our prosperity and security interests are tightly linked through the movement of ideas, people, and goods. What happens in the Northern Triangle countries of El Salvador, Honduras, and Guatemala directly affects the security and economic interests of the United States and other countries in the region. A more prosperous, safer Central America will do much to halt illegal and dangerous migration, defeat transnational drug cartels and gangs, and end corruption in their economies.

Secretary Kelly will do a thorough job of leading a discussion on how to deepen our regional security cooperation tomorrow, but my message of economic development today goes hand in hand with his.

Without security, it is impossible to have the stability that is conducive to robust economic development.

In order to boost economic prosperity, it is imperative that we work together to strengthen the formal economy and diminish the economic drivers of illegal migration and other illicit activities.

A legal and orderly labor market is integral to prosperity in Central America. The Northern Triangle has one of the highest rates of informality in the world. In 2016, 70 percent of the labor force worked in the informal sector, with little certainty as to when or how long their employment will last. More often than not, these day-to-day jobs do not have the prospects of any upward mobility. An important enabler is the support and the means for children to stay in school and continue their education, gain the basic skills that are necessary to participate in a more productive employment, thus providing a real alternative to stay home in their home country, rather than seeking their future through irregular migration. Increased development of human capital also leads to stronger markets for U.S. companies, jobs for U.S. workers, and increased trade in the region. Equipping citizens with greater skill levels also provides people the means to and the access to permanent employment, and that is the solution to reducing criminal activity.

The United States is continuing its efforts to create a positive climate for private investment. The U.S. is encouraged by what the Northern Triangle governments’ Plan of the Alliance for Prosperity has already done to encourage economic growth and create a more attractive destination for investment. We encourage additional steps to end corruption, minimize red tape, reform the tax codes, and streamline import/export systems and customs procedures. Further commitment to these measures will improve the overall economic competitiveness of the Northern Triangle countries, and boost the willingness of private companies to invest in Central America.

To the representatives of the private sector, I know there are many considerations at play when companies make decisions about where, when, and whether to invest. But even as there are challenges ahead, there are significant opportunities on the horizon in Central America. Private sector companies, international financial institutions, and other partners should identify the policies that you need to spark investment in the region, promote sustainable growth, and improve the economic conditions for companies to be successful. I urge the Northern Triangle governments to listen – listen to these recommendations from the private sector, and continue the important progress you have made toward improving the business climate, whether it’s strengthening institutions, removing harmful or obstructive regulations, and of course, rooting out corruption.

Strong infrastructure – reliable roads, ports, and electrical grids – is a key component of strong economic growth. Central America will welcome an estimated 25 million new urban dwellers over the next 30 years. As cities expand, they will need to provide basic additional services and infrastructure. The private sector should consider how to partner with the governments to address these needs.

The internet – as well as the larger digital economy – is also a strong driver of economic growth. Internet access has become a prerequisite for modern economic development. The World Bank has shown that for every 10 percent increase in the number of high-speed internet connections, a country’s gross domestic product rises by approximately 1.4 percent. The countries of Central America must prioritize the deployment of internet infrastructure and digital services.

A secure and prosperous Central America contributes to a safer, more prosperous United States and Western Hemisphere. The United States recognizes the region as an important area in our foreign policy agenda, and we welcome this opportunity today to work together to create the prosperity we all want and start solving the problems that are obstacles. Thank you very much.