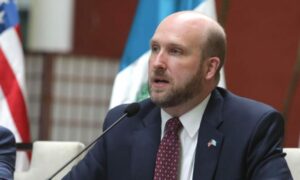 Thank you Jason, it’s a real honor and privilege to be able to participate in today’s discussion, I just want to start by thanking the Atlantic Council for pulling together such a great panel and having this important conversation at this moment, obviously we in the U.S. government are working very closely with partners across the board to strengthen rule of law and address corruption and impunity in Guatemala and these types of conversations are immensely valuable so I wanted to say thank you for the opportunity to participate today.

As you noted and as I think we all know strengthen rule of law is really fundamental to ensuring citizen security creating an enabling environment for job creation addressing the root causes of irregular migration and to really help Guatemala build a more prosperous and secure future, and as a close and longstanding partner of Guatemala the U.S. government is very strongly supporting and working with partners across the board on anti-corruption and rule of law efforts. As was noted, president Biden and his administration have been working on this from day one on February 2nd he issued an executive order calling from preparation of the strategy specifically to address root causes of irregular migration and in this strategy the president directed that among other elements combatting corruption and impunity and strengthen democratic governance as well as advancing rule of law had to be key components, and so now as we prepare for vice president Harris’ visit to Guatemala in the coming days in her role as in leading the United states focus on addressing root causes of migration we’re working very holistically to address a range of issues including, of course, the immediate humanitarian challenges that confront GuatemalaI in the region including COVID-19 and the impact of the tropical storms the end of last year fostering economic opportunity, fighting organized crime and drug trafficking, assisting with climate adaptation, addressing gender based violence, supporting the inclusion of indigenous, LGBTIQ people afro descendants, and above all and essential to all of these efforts that I’ve listed is fighting corruption and strengthening the rule of law.

So, what are we specifically doing in that area of anti-corruption and strengthening rule of law? First, we’re supporting Guatemala’s efforts to disrupt an organized crime and transnational criminal organizations. And that includes everything from capacity building and information sharing to helping strengthen the actual activities of Guatemalan law enforcement, and we’re doing that in part because not only is it Homeland Security and strengthening efforts against these criminal activities, but crime of this nature is fueling challenges around rule of law and organized crime is fueling corruption, not only in Guatemala but across region.

The cooperation that we’ve done together is bearing results. We’ve had record number of arrests for extraditions just since the beginning of the year beginning of 2021 we’ve had 25 such arrests of individuals involved in organized crime and current transnational criminal activity. There’s been increases and seizures of drugs reduce, reduced flows through maritime and aerial lines and so we are having results through greater cooperation in this area, and that in turn reduces the fuel for corruption and the threats to institutions that are responsible for enforcing rule of law.

Secondly, we are partnering to address the hurdles that exist to attracting investment in Guatemala. One of the most pervasive impacts of corruption and lack of transparency is impediments to doing business and to creating the jobs in the formal sector and good jobs that can reduce poverty and create opportunity in the long term.

So, how are we doing that? We’re working on a range of issues and just as a few examples: digitalization, using digital technology particularly with institutions like Guatemala’s tax authority, making processes more transparent, more technology based, less hands touching the papers that makes for less potential impediments to transparency. Likewise, in terms of port security and efficiency: one of the bigger challenges that many companies face is in terms of getting products in and out of Guatemala’s ports and that applies to U.S. companies other international companies and Guatemalan companies and so we’re working very closely with Guatemalan authorities to strengthen port security, strength and efficiency and increase transparency in that space.

Thirdly, we’re working to build the effectiveness of government institutions that are responsible for enforcing law and fighting impunity. That includes the presidential anti-corruption Commission that president Giammattei launched in January of 2020. It includes working very closely in training equipping, sharing information with Guatemala’s Public Ministry to help increase access to justice in particular. One of the important achievements in this area over the last year has been stablishing from first time ever the presence of the Public Ministry and prosecutors and Public Ministry in each of Guatemala’s 340 municipalities.

This is a commitment that dates back to the 1995-1996 peace accords and so this is a major step forward in terms of increasing access to justice and in term of rule of law. We are also working to robustly support the special prosecutor against corruption impunity known as FECI which remains one of Guatemala’s most effective tools for prosecuting corruption, as well as the office of the prosecutor against corruption.

So, our assistance is working to institutionalized knowledge and skills that help in terms of investigation and prosecution of crimes involving corruption but also, other areas as well as human smuggling, gender-based violence, environmental degradation, all of which are part of strong rule of law.

We are also working with Guatemalan authorities to place one stop integrated service centers for particular types of crimes, including the high level of violence against women and specifically helping to provide legal services and ensure 24-hour assistance to women and children who are victims of violence. We’ve worked, as I mentioned, in the tax area to help support innovative models of using technology both in areas such as tax and customs, but also in the broader judiciary to help address tax customs and other financial crimes that can be very complex but that again in the road of rule of law and in particularly impact of the enabling environment for business.

We have also worked in area forensics, helping to increase the utilization of scientific evidence to enhance and augment and increase the number of prosecutions and convictions rather than just being able to having to rely on witness testimony. So, there is a lot of that we’re doing in that space of using technology and better processes to increase rule of law.

Finally, another example is working with the courts, in particular the Constitutional Court, has been a partner and an institution that we worked with closely recent years between 2019 and 2020 we worked specifically on establishing an electronic case management and digitization of processes effort which that alone has reduced the backlog of cases in that court by over 85%.

So, we are working in a range of areas of assistance, but we are also using legal tools that the U.S. Congress is providing to raise awareness and accountability around corruption and rule of law. As corruption and rule of law or an issue not only for Guatemala but there also for U.S. National Security, and indeed we continue to work in these efforts to ensure that there is prosperity and security in the region and that the public sectors that are responsible for supporting prosperity and security are able to meet the needs and expectations of Guatemalan citizens.

So we have used a series of tools to date, that U.S. Congress has given us including visa revocations we’ve had several of them over the last year which are essentially tools to be able to die access of corrupt individuals to the United states to either hide their funds or benefit from their illicit activities. We’ve also used global Magnitsky sanctions and April for the first time we designated corrupt actors in Guatemala using the anti-corruption provisions of the global Magnitsky act.

Looking ahead, there are additional tools and efforts that we can use, the section 353 report is oftentimes referred to in the press as the Engle list is actually a new mechanism that Congress has established to ensure that individuals that are involved in corruption or that are undermining democratic processes or institutions can be publicly identified and prohibited from travel or taking refuge in the United States, and that is a tool that is going to be used in the coming future.

Likewise, by the administration has been very clear about looking at opportunities to examine more cooperation particularly with prosecutors in the region for deepening and investigations and prosecution of corruption and corrupt acts, so that’s an area that we’re going to continue to expand our cooperation with the goal of supporting rule of law and transparency.

But obviously in addition to what we’re doing as a government and what we’re doing with the Guatemalan government, we really need a whole society partnership and that is happening and we want to continue to build that. So in addition to the systems that we have on a bilateral basis and the legal tools we have that I’ve outlined we’re also looking to work with government and partners beyond government to fight corruption to address transparency to strengthen the rule of law and that includes working with the U.S. and international private sector.  There has been some great initiatives that have come through a range of entities and mechanisms including the Association of American Chambers of Commerce where they’ve worked on new ideas to utilize digitization and technology to again make processes more efficient to strengthen the institutions that are responsible for those processes and to reduce the potential for corruption.

Here in Guatemala the private sector has been working closely with the Guatemalan government on the “Guatemala does not stop” initiative which has a pillar around rule of law as a key component for reactivating and growing the economy, creating jobs through transparent processes through ideas around judicial sector modernization and for making Guatemala a more enabling environment for business.

Finally, civil society must continue to play its critical role and highlighting transparency and speaking out about rule law issues developing critical proposals in areas from the judiciary to the civil service public from human and more. So, we were very engaged with working across all of these lines of partnership and we want to again I want to personally thank Atlantic Council for today’s session, this is the exact type of cooperation and support in partnership that we need to highlight the essential role of rule of law and anti-corruption efforts and generating greater prosperity, security, good governance in Guatemala, now I also want to underscore again that the commitment of United States is very strong in this area we’re, going to continue to work with all Guatemalan sectors all stakeholders to support the continued strengthening rule of law in Guatemala’s future by joining forces and very confident that governments international partners, civil society and the private sector together we can construct a better safer and more prosperous future.

So, thank you again for today’s discussion I look forward to hearing from our great panelists that we have today just thank you again to the Atlantic Council for convening us in this very important conversation.