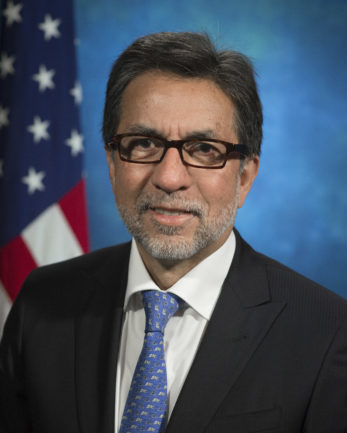 Luis E. Arreaga was confirmed by the United States Senate as U.S. Ambassador to the Republic of Guatemala on August 3, 2017 and arrived in Guatemala City on October 3, 2017.  Ambassador Arreaga is a career member of the Senior Foreign Service.

Prior to this appointment, Ambassador Arreaga served as Principal Deputy Assistant Secretary of State for the Bureau of International Narcotics and Law Enforcement Affairs from November, 2013 to September, 2017.  In this capacity he was responsible for State Department programs combating illicit drugs and organized crime, as well as support for law enforcement and rule of law in the Western Hemisphere.

He previously served as Deputy Chief of Mission at the United States Embassy in Panama, U.S. Consul General in Vancouver, Canada and as director of the Executive Secretariat Staff at the U.S. Department of State in Washington, D.C.  He has also served as Deputy Director of the State Department´s Operations Center and Special Assistant to the Under Secretary for Political Affairs.  Other overseas postings include United States Mission to the United Nations in Geneva, the United States Embassy in Spain, and the Agency for International Development in Peru, El Salvador, and Honduras.

Luis Arreaga was born and raised in Guatemala before immigrating to the United States.  He is a graduate of the University of Wisconsin at Milwaukee where he received a Ph.D. in economics and a Master’s Degree in Management.