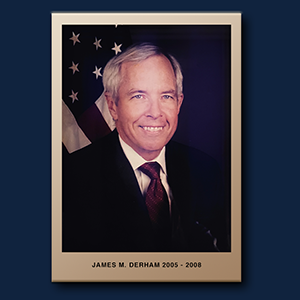 Ambassador James Michael Derham served as U.S. Ambassador to Guatemala from 2005 to 2008. A lifelong civil servant, he dedicated his foreign service career to the Western Hemisphere and economic concerns. He died on Oct. 12 in Arlington, Virginia at the age of 74.

Ambassador Derham led the Embassy in Caracas as Chargé d’Affaires during the final 18 months of the administration of President Hugo Chavez. As Ambassador to Guatemala, he guided US efforts to establish the International Commission Against Impunity in Guatemala (CICIG), and ushered Guatemala into the CAFTA-DR free trade agreement.

Ambassador Derham’s other senior assignments included Principal Deputy Assistant Secretary of State for Western Hemisphere Affairs; Deputy Chief of Mission at the Embassy in Mexico City; Chargé d’Affaires and Deputy Chief of Mission at the U.S. Embassy in Brasilia; and Consul General in Rio de Janeiro. He also served in Salvador da Bahia, Buenos Aires and one tour in Rome.

For over four decades, he was renowned in the State Department for commuting to work by bicycle in all kinds of weather. Ambassador Derham graduated from Regis H.S. in Manhattan and Fordham University. He earned masters’ degrees from the Kennedy School of Harvard University and the George Washington University, and served in the U.S. Army.

The week before Ambassador Derham entered the Foreign Service in 1974, he met his wife, another Foreign Service Officer, Joleen Schweitzer, while both were working at the Export-Import Bank in Washington.

Ambassador Derham is survived by his wife, three children, grandchildren and brother.