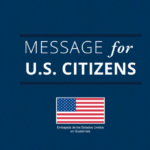 Please be advised that Guatemala will hold general elections this year for its president, vice president, congressional seats, and other governmental positions, including all 340 mayors. The official campaign season will begin on March 27, 2023. The first round of voting is scheduled for June 25, 2023, and, if necessary, the second round of voting for the presidential and vice-presidential races is scheduled for August 27, 2023.

As is typical of any election season, during the months leading up to the elections there may be large rallies, demonstrations, and other political events associated with campaigning throughout the country. Such events may cause increased traffic and otherwise disrupt movement, complicating travel. Local governmental services may also be limited, delayed, or unavailable at times during the election season. We remind U.S. citizens to be vigilant and aware of your surroundings and any road closures.