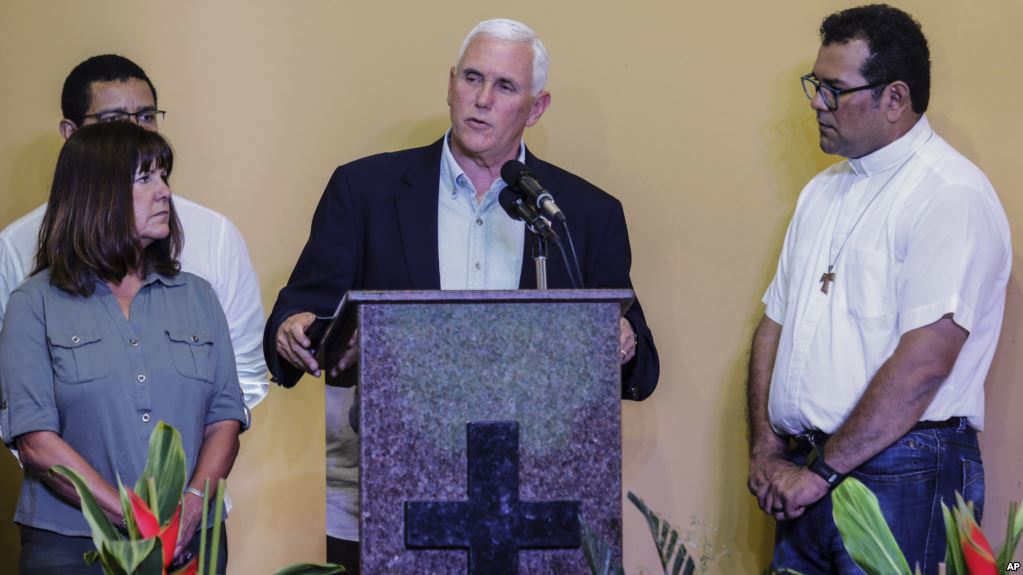 THE VICE PRESIDENT: Thank you, Father Alex. It is a great privilege for my wife Karen and I to be here with you, with Archbishop Don Sergio here at Santa Catarina, which is demonstrating the love of God by being the hands and feet of Christ to people from Venezuela. Would you join me in thanking this wonderful ministry and the impact that they’re having. It’s truly inspiring. (Applause.)

I not only want to thank the leadership of this ministry and this Archdiocese, but we’re also very grateful to the Director of Caritas here in Manaus, Italo Lima, and the Brazil representative of the U.N. High Commissioner for Refugees, Isabel Marquez. Thank you for all you do. (Applause.)

I’m here to bring a message on behalf of President Donald Trump and the American people, to say to our neighbors from Venezuela and all of those who minister to these precious families: We are with you, we stand with you, and we will keep standing with you until democracy is restored in Venezuela. (Applause.)

The people of Venezuela deserve libertad and we will stand, with you as America has to this moment, to see that libertad is restored.

Back in our country we face a crisis on our southern border as many seek to come into America for a better life. The families that Karen and I met today who have fled from Venezuela came here to Brazil not to seek a better life; they came here to live, to survive. And the families we spoke to today told us again and again how you desire to return to Venezuela and restore freedom in your land. And I want to assure you that we will stand with you in that cause.

Venezuela was once a beacon of prosperity and freedom in the new world. But under Nicolas Maduro, Venezuela’s great democracy has been reduced by a brutal dictatorship. And the deprivation that has followed has been a consequence of that failed leadership.

The Maduro regime has violently suppressed those who question or criticize their reign. They’ve thrown thousands of political prisoners behind bars. Protestors have been gunned down in the streets. The government’s vicious gangs have brought fear into the heart of neighborhoods and homes. And so many of you have experienced and seen firsthand the extraordinary, heartbreaking, devastating impact of dictatorship on your homeland in Venezuela.

The Maduro regime has crippled the economy. It is remarkable to think that Venezuela was once one of the richest nations in our hemisphere and it is now among the poorest.

But the true cost of the crimes of the Maduro regime cannot be assessed in numbers but they can only be calculated in lives and the impact on lives. As I stand before you today, it is remarkable to think that, including the Venezuelans gathered here, more than 2 million people from your country have fled the repressive regime of Maduro. Two million people have fled the result of dictatorship and political repression that’s resulted in deprivation and created conditions near starvation.

We heard again and again from families today about the impact of no work, of hyperinflation of the currency, no food, and no medicine has had on the families.

I spoke to Reinaldo and Jannis and their three beautiful children who are with us today. They told us they used to live in a neighborhood in Venezuela that was controlled by government gangs. They were forced to vote or else they’d get cut off from the benefits that they needed to get by. Reinaldo actually told me that he had come to a point where he had to work for a week to afford a day of food for his family. And so he came here into the loving arms of this ministry and the support of the international community.

We spoke to Willi and Jenny and their two children, Gabriel and Moises. For too long, they too had been struggling to find the most basic needs of their family. Their children couldn’t get the education they need. They often had to choose between continuing to go to school, or have medicine and food. Recently, Willi’s salary started to drop and his hours reached the point that he couldn’t support his family anymore and he came here and has found opportunity and hope in Brazil.

We met with Kritci and Hector and their beautiful family. Kritci and Hector told us of the choice they had to make between continuing to provide education for their children or a roof over their head. Hector fled first to Brazil in December. Kritci and the two children, including a newborn followed a few months later.

But each and every one of these families told Karen and me that you want to go home; you want to return to Venezuela. But as young Nicoll, a vibrant 22-year-old student, told me personally, she said, “We need freedom to go back.” And, Nicoll, America will stand with the people of Venezuela until you have the freedom to go back. (Applause.)

The Good Book tells us “to do justice, to love kindness.” And in America, we do both every day. We believe in the rule of law. We stand for law and order, but we also stand for compassion. And I’m proud with the — to be able to report to you that the American people have and will continue to provide relief and support to Venezuelans who have been driven from their country through dictatorship and deprivation.

Let me also express our profound appreciation to Brazil and the leadership of this great nation for all it’s done to support the more than 50,000 Venezuelans, you among them, who have fled dictatorship and deprivation in the last year-and-a-half.

Now, President Temer pledged nearly $60 million of support, and this shelter is just one sign of the heart of the Brazilian people. And they have our thanks and our continued partnership in this cause.

Let me also commend Colombia and Ecuador, and all the nations of the region that are providing shelter and safety for Venezuelans who are standing with you. We truly believe this is a hemisphere of freedom. The destiny of this new world is a destiny of freedom and democracy. And we’ve continued to see throughout our history a steady expansion with ebbs and flows, but a steady expansion of freedom.

And so we know freedom will win in the end, just as it won in my nation when we won our independence; just as freedom is winning all across South America. Freedom and democracy will prevail in Venezuela. Libertad will be restored. (Applause.)

I say this because I have faith. I have faith in the strong people of Venezuela. Seeing the light in your eyes, in our conversations today, was truly inspiring, and Karen and I will never forget it. To see what you’re going through, and yet to sense your strength in the midst of it, tells us great things about you and great things about the Venezuelan people.

I also have faith that this international community will continue to stand together, particularly in the family of nations in this hemisphere, in our neighborhood, until freedom is restored in Venezuela.

And lastly, I have that other kind of faith that echoes out of these hallways and is lived out in the example of charity here in this great church, in this ministry, every day. The Bible tells us, “Where the spirit of the Lord is, there is freedom.” And so I truly do know and believe, knowing the heart of faith of people of Venezuela, the heart of faith of millions across this new world, that freedom will prevail in Venezuela. It is our shared destiny.

So thank you all for your warm hospitality. Thank you so much to the wonderful people here at Santa Catarina and all of those who support you in this work.