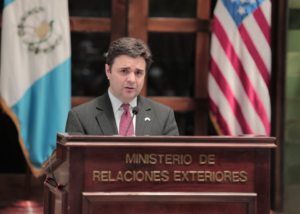 Mister Foreign Minister, thank you very much. A tremendous greeting to everyone. It is an honor and a pleasure to be here with you, and I want to thank you. I was just telling the Foreign Minister that never, in so many years of diplomatic work, have I been in a country and met more than half of a government cabinet in less than 18 hours, from the Foreign Minister and his team to the President, to the Ministers that he mentioned, and many representatives here.

We are also very grateful to the participating international organizations, invited by the Ministry of Foreign Affairs today, to discuss the topics that the Foreign Minister has already mentioned in detail. I am are here with a team representing the White House and other State Department representatives to underscore the importance of Central America for the United States – this could not be clearer with the designation of Vice President Kamala Harris to lead the effort to address not only matters linked to migration, but also its causes, which are driving irregular migration from Central America through Mexico toward the United States.

The efforts of our eam in the State Department, other agencies, and the White House are prevailing because we have faith, trust; and we’re not only thinking about challenges, but are also exploring the opportunities that exist in Central America. We are here meeting with a broad spectrum of Guatemalans. And here, especially, I want to say that the receptivity and the spirit of collaboration of our friends in the Government of Guatemala has been impressive. What we have found is a willingness to work, not only with us, but with Mexico, Honduras, El Salvador, international bodies, and civil society to advance and push forward an agenda that contends with issues that include and go beyond securing our borders.

Here I would like to emphasize: The United States border is closed. We are here to also talk about the need, and the efforts of the White House, to create legal pathways for migration, so that people do not have to embark on irregular and very dangerous paths. We have unfortunately seen tragedies like the one that occurred in Mexico a few weeks ago, which affected the Guatemalan people deeply. To avoid these kinds of events, we also want to ensure that there are ways to access protection for people who require such protection. Finally, what can we do to create new conditions, so that Guatemalans and other people from Central America and Mexico don’t have to seek their future in the United States? As the Foreign Minister mentioned, the rule of law plays and important role to help create opportunities, to create employment, provide healthcare, and provide education.

We discussed these issues in depth with the President yesterday, and we will continue these conversations about the need to create the conditions so that Guatemalans can make their living with dignity and hope here in Guatemala, as it should be; we have seen this commitment from so many Guatemalans.

Our countries are friends; our societies are friends, and to us it is important to underscore this fact, too. This is a joint effort by society, civil society, the private sector, and the U.S. government to create and to strengthen links with counterparts in Guatemala and in Central America to reach that end that we all want: that we – all our peoples – can live in peace, with security and prosperity, and seek the opportunities that lie ahead.

Thank you, Mister Foreign Minister. It has been a great pleasure, and we are looking forward to new opportunities, new encounters, and new collaborations. Thank you very much.