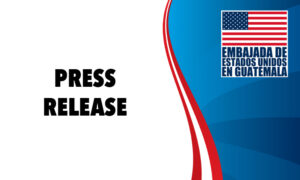 Guatemala City – The United States Government is providing immediate aerial assistance to the government of Guatemala to support communities and individuals impacted by Tropical Depression Eta. This assistance is in the form of two U.S. helicopters as well as pilot support and technical assistance for five Policia Nacional (PNC) helicopters, all of which will be able to reach communities in El Quiché, Petén, Izabal, Zacapa, Chiquimula, Alta Verapaz, Jutiapa, El Progreso, and Santa Rosa.

As Ambassador Popp stated: “The United States is a steadfast partner to Guatemala in confronting the destruction wrought by Tropical Depression Eta. As part of our continued work with the government of Guatemala to support those most affected by the storm, U.S. Southern Command and the U.S. Department of State’s International Law Enforcement and Narcotics (INL) Bureau have deployed helicopters and additional support to provide immediate assistance to communities and individuals who are cut off from rescue services by flooding or loss of infrastructure.”

The two U.S. helicopters include a U.S. Southern Command HH-60 Blackhawk helicopter for search and rescue operations and a U.S. Southern Command CH-47 Chinook helicopter capable of delivering large volumes of critical supplies. PNC helicopters are currently providing food, water, and emergency supplies. INL and Guatemalan personnel are jointly piloting these PNC helicopters, highlighting the close and continuing partnership between our two governments to help those most in need at this critical time.

Helicopter operations are already ongoing in the affected departments and will continue over the coming days.

The United States again sends its condolences to those who have lost loved ones during this tragedy, and remains committed to our longstanding partnership with the people of Guatemala.